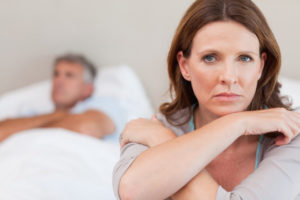 Hormone Replacement Therapy (HRT) is the use of medicine containing female hormones estrogen and progesterone to reduce the effects of menopause such as hot flashes. Hormone Replacement Therapy works to restore the hormones that the body no longer makes after menopause. Doctors consider this type of therapy as the best way to treat menopause-related effects but advise re-evaluation six months into the treatment.

Estrogen hormone prepares the uterus to receive a fertilized egg and also controls how the body utilizes calcium. High levels of estrogen increase the chances of getting cancer of the endometrium and why it goes hand in hand with progesterone. Progesterone reduces the likelihood of getting this type of cancer as it thins the lining of the uterus. The chances of getting this cancer are high in females who’ve hit menopause as cells from the endometrium aren’t leaving your body as would be the case during your period.

A common occurrence in women who are at the menopause age is low sexual drive and complicated vaginal problems. According to Menopause Matters survey, 51% of the females polled reported that once they hit menopause bothersome vaginal problems like bleeding and vaginal dryness were key factors for them to avoid sex. 47% also said that after menopause they realized that their sexual drive was lacking. The females were told to go for consultations with professional healthcare givers. A majority of those that started Hormone Replacement Therapy reported that they felt like their old selves. HRT eliminated the complicated vaginal issues and low sex drives. Hormone Replacement Therapy takes four to six weeks to show results and is known to help women suffering from low levels of testosterone which is also a major contributor of low sexual interest. Through HRT testosterone levels are increased, and sexual interest and response are restored.

As good as HRT is, some medical experts advise against its use. They say that its continued use causes long-term effects and diseases such as heart complications, stroke, blood clots and breast cancer. These issues are the main reason why HRT is not recommended for everyone. Females suffering from the conditions mentioned above are advised to seek other alternatives to the HRT treatment. Women who suffer from early menopause and those who had their ovaries removed are also advised not to undertake the treatment until the age of 45 at the earliest.